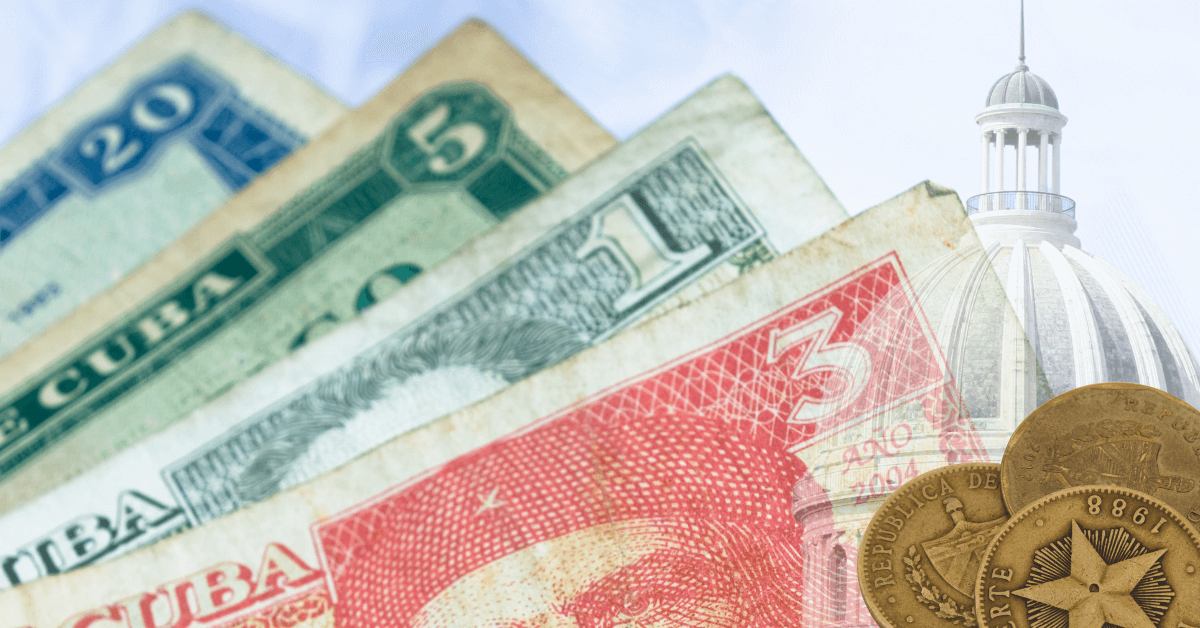 Admittedly, trying to understand the situation of currency in Cuba can be confusing. Until recently, there were TWO types of Cuban currency…and many people in Cuba used them both every day. Having two currencies created a challenge for visitors and locals and made navigating currency in Cuba quite difficult.

In this updated guide, we break down how these changes affect visitors to Cuba and share everything you need to know about how to use Cuban pesos, including how to exchange money and what currency to bring with you to Cuba.

This was a major change in the currency of Cuba, but one that simplified a confusing two-currency system.

Cuba’s official currency is the Cuban peso, known commonly as the C.U.P. and it is the only currency accepted in Cuba (for the most part… more on this later).

You can bring any type of currency to the island and exchange it for pesos once you arrive, though most bring dollars or Euros. CADECA money exchange locations will accept many types of currency.

Despite the Cuban peso being the only official currency in Cuba, there are stores that sell products like groceries, appliances, and other home goods in U.S. dollars and Euros.

What is the Best Currency to Use in Cuba?

Legally, the only currency you can use in Cuba is the Cuban peso (CUP). However, any Cuban would be glad to accept foreign currency, especially Euros or USD.

I don’t recommend trying to pay for things with these currencies directly – change them for Cuban pesos – but in a pinch I’d bet you won’t have an issue paying for things in foreign currency.

What is the Best Currency to Bring to Cuba?

Bring Euros or U.S. Dollars to Cuba if you can. I highly (highly!) recommend that you do not exchange money at the airport or at the CADECA official money exchange locations – speak with your accommodation host and ask where you can exchange your money.

You’ll get triple or quadruple the amount of Cuban pesos if you change your money with an unofficial moneychanger.

The Cuban peso is valued at $1 USD = 24 CUP (Cuban pesos) and is held at this rate, not allowed to fluctuate as most exchanged currencies do. That means you won’t have to worry about currency fluctuations while visiting.

However, it also has created a double exchange rate, where informal markets have cropped up for U.S. dollars and Euros, and you’ll find very different exchange rates, sometimes up to around $1 USD = 120 pesos.

Cuban is currently experiencing rapid inflation, so the unofficial rate of exchange for the peso is changing fast.

Using any type of official exchange, like at the official CADECA money exchange locations throughout the country or in the airport, you’ll get the $1 USD = 24 CUP exchange rate. You’ll also get this exchange rate when withdrawing money from an ATM or bank.

The Cuban peso is also not a currency you can obtain prior to visiting the island – meaning you’ll want to bring cash in your home currency with you for your trip or withdraw money in Cuban pesos from an ATM when you arrive.

I recommend bringing cash with you, as sometimes banks can have extremely long lines in Cuba or ATMs can be difficult to find. Make sure to check with your accommodation host or hotel about the nearest bank or ATM.

Plus, you’ll find two very different exchange rates in Cuba, which means you’ll get triple or even quadruple the pesos if you exchange cash while in Cuba, rather than using an ATM.

Traveling from the United States? Check out our banking in Cuba section below for more details about restrictions on U.S. debit card and credit card use in Cuba.

What to Bring to Cuba

Check out our Ultimate Cuba Packing List to help you pack for your trip – we’re sharing exactly what to bring to Cuba, and what we never travel without.

Cuba’s change from two currencies to one meant that the Cuban Convertible Peso, also known as the CUC, has been eliminated from use in Cuba.

From its start, the convertible peso was the currency of Cuba intended for foreign transactions, and the CUC was mostly used in the tourism industry.

Many restaurants, hotels, guides, and others that previously priced their services in CUC are still working on changing their pricing on websites, attraction listings, and more. If you come across a listing in CUC, know that you’ll now be charged Cuban pesos instead.

The former exchange rate for the CUC was pegged to the U.S. dollar, 1 CUC = 1 USD. For the first few months of 2021, the government has continued to accept CUC and allow for people to change their CUC to Cuban pesos, but don’t expect to find it in active use anymore.

Unlike other currencies that can be exchanged anywhere in the world, you can’t get Cuban pesos off the island – you’ll have to wait to get it until you arrive and then exchange money in Cuba.

This means you should bring cash with you to Cuba and exchange it once you arrive.

Prior to unifying the two currencies and adopting the Cuban peso, there was a 10% penalty charged on exchanging U.S. dollars in Cuba – you may see some out-of-date travel blogs or websites recommending that you bring Euros or Canadian dollars to Cuba to avoid this penalty.

In 2020 the penalty on using the U.S. dollar was dropped, and now you’ll only be charged the standard surcharge used when converting any currency.

At the airport when you arrive, you can change some of your money into Cuban pesos. I recommend changing just a small portion of what you’ll need for the trip when you arrive, maybe just enough for your first day or two, and not everything at once. Wait until you get to your accommodation to exchange more.

Where to Exchange Money in Cuba

If you’re staying in a casa particular or an Airbnb, I recommend asking your host where you can change money. They’ll be able to help you do that, either letting you know where there is a location you can exchange money nearby (called a CADECA or “casa de cambio”) or letting you know where you may be able to get a more favorable exchange rate by exchanging money informally.

Informal money changing arranged through casa particular or Airbnb hosts is quite safe and secure, as the hosts know that their rental business relies on their guests having a good experience.

If this is something you’re interested in, I’d recommend asking your host to have the money changer come to the property with them to help change money – this is completely normal and the safest way to do it.

As you start to see how much you’re spending each day, you’ll be able to exchange more money later, so you’re not stuck exchanging your money back again if you have more than you need by the time you leave.

An important reminder if you’re banking is set up in the United States, you won’t be able to use your debit card or credit card at all while in Cuba due to U.S. sanctions on Cuba.

While this is due to the U.S. embargo on Cuba rather than Cuban currency itself, it’s definitely something to be aware of as you prepare for your visit.

If your banking is through a U.S. bank – or your credit cards are issued in the United States, you’ll need to bring all the money you’ll use during the duration of your trip in cash with you when you arrive.

Visitors who have credit cards and bank accounts outside of the United States should have no issues accessing their money here. Any money withdrawn from ATMs or banks will be in Cuban pesos.

However, some online banking apps (like Paypal and others) are regularly blocked by the United States for all users here, so I recommend downloading a VPN (a virtual private network) like NordVPN to make sure you can still access online banking here.

Even if you’re not very tech-savvy, NordVPN is very easy to use. Just hit a button on your phone or computer and you’re instantly connected to a secure network that makes it look like you’re accessing the internet from another country, avoiding blocks and staying safe online.

Even if your banking is not set up in the United States, I recommend bringing as much money in cash as you can. With the informal exchange range and the official one being so different, you’ll save significantly.

Plus, banks tend to have long lines here and ATMs can sometimes be hard to find, especially if you won’t be in a city. You wouldn’t want to get stuck without cash in Cuba.